The importance of aspect ratio for your projector screen 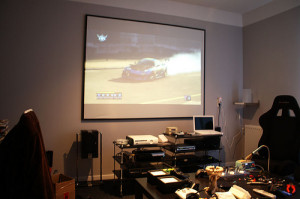 Aspect ratio is just as important as the projector’s gain and material. It’s the proportion of width and height of an image projected onto the screen. It’s typically expressed as numbers, such as 4:3, but these numbers ARE NEVER the size of the screen.

The first number (4) is the width of the image while the second number is the height. So for example, 4:3 would mean that for every four inches of image width, you would have 3 inches of height.

The aspect ratio on your projector screen is going to depend on what you plan to watch. It will help you determine what screen to buy

This is the standard aspect ratio even though it’s considered somewhat dated. Despite our move to HD content, broadcasters still put out films and TV shows in 4:30 aspect ratio. All VHS tapes of older films and TV shows will be in this aspect ratio. Displaying them on a larger screen will make the image appear stretched or create black borders running along the edge called pillar boxing. The 4:3 aspect ratio is almost the standard for business presentations. However, with the introduction of laptops with widescreen displays, some businesses are moving away from this standard.  Any device or projector screen with the 4:3 aspect ratio will not be able to show High Definition visual since they requite widescreen resolutions. HD films, TV shows or videogame graphics and text when forced into the 4:3 resolutions are going to appear squashed due to the image compression.

Almost all HD film and TV programming is presented in the 16:9 ratio, particularly with sporting event. This is also the standard aspect ratio for all films including those on Blu-ray discs and DVDs so is the most often used in any home theater projectors.  HDTV programs’ images fit perfectly on a screen with 16:9 aspect ratios with no image distortion. You can watch 4:3 aspect ratio without any issues except for the black borders along the edges. These black bars are going to be seen more easily on white screens with a lower gain.

The 2.35:1 settings is most suited for film buff seeking the cinemascope experience with their home theater. Best suited for film buffs that want to use their projection screens primarily to watch modern movies. With a 2.35:1 screen, the height is always filled, no matter what the aspect ratio of the film to TV show.

Read more about choosing your projector: