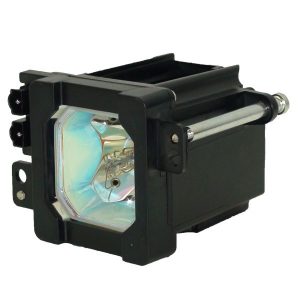 When its time to replace the JVC HD-52FA97 TV projector lamp the following message appears on screen: LAMP NEEDS TO BE REPLACED. REFER TO OWNER’S MANUAL FOR REPLACEMENT INSTRUCTIONS. AFTER REPLACING THE LAMP, PLEASE RESET TIMER IN THE TV MENU.

This message will continue flashing until the new lamp has been installed.

Don’t settle for anything but the best JVC HD-52FA97 TV projector lamp. Always install an authentic projection lamp. When buying look for the seal of approval — don’t get caught with a counterfeit generic projector lamp!

Find this lamp on Amazon sold by these authorized dealers:

How to replace the lamp

The JVC HD-52FA97 TV uses the JVC TS-CL110UAA TV Lamp. Before you start doing anything follow these safety tips:

Step One: To replace the lamp: On the back of your TV locate the lamp door on the left side. Use a flat screw driver to unlock it and remove it.

Step Three: Remove the lamp cover from the TV.

Step Five: Using the metal handle, slowly pull the lamp out of the TV.

Step Six: Place the new JVC TS-CL110UAA TV Lamp in place, makng sure it’s locked onto place. Tighten the two screws on the lamp to secre it in place. Secure it in place using the screwdriver.

Step Seven: Replace the lamp door before trying to turn the TV, that’s because there is a blue switch that needs to be pressed in order to turn on. You must now reset the lamp timer

If the TV won’t turn on after changing the lamp, look at our troubleshooting guide: